Customer Testimonial: what is this Castor 185 worth?

At western based French Farm GAEC La Bréquinière, the Lucas G brand is well known. Already users of an Autospire 160, Romain, Thomas and Raphaël have just acquired a Castor 185, replacing their previous Raptor. We met them and they gave us their impressions after a month of using this high volume straw blower & bale feeder.

Last summer, the three partners of the GAEC La Bréquinière doubled their number of calves by building additional 312 head housing. And inevitably, their straw bedding requirements have increased. For a few months, their Raptor did the job, but finally, they decided to upgrade machines.

Before taking the decision, the three farmers took the time to study all the possibilities.

After watching videos on Youtube and on Lucas G's website, they decided to go and see a machine in operation at another farm. For Romain Poupelin, one of the partners, "it's important to see the machine in real life and to get feedback from someone who uses it. You don't buy without looking at it, without knowing how it works. If there's something you haven't seen, you're disappointed. The farmer we visited had owned his for only 2 months, but we quickly saw the advantages.

What convinced them? The capacity (18 m3) and the fact that they could load up to four bales of straw in bulk.  With other brands, they were talking about a capacity of four bales, but it was more tedious: you had to position them in the machine, get into the straw blower to remove the strings, so in terms of practicality and time saving, it was less interesting," explains Romain. Now, what has really improved is that we place our bales in the muck house, we cut the strings beforehand, then we simply load them in with a telehandler.

Greater convenience and, above all, a significant time saving. 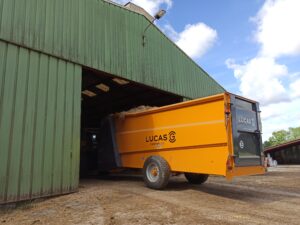 "For our two buildings, I use four bales, two bales in each building. Once the Castor 185 is loaded, I take 15 minutes to do the straw bedding for the two buildings. Then I have to add 15 minutes to prepare the bales and load them for the next day. In 30 minutes, everything is done," says Romain.

And this winter, when the cows and heifers are no longer on pasture "I'm going to use six bales a day. We have estimated that it will take us 25 minutes to do everything. So that's time saved for looking after the cows and calves," he adds.

Despite its large size, this high volume straw blower is surprisingly easy to operate.  This is due in part to the Intuitive Pro Control. Romain explains: "I had barely used it for 15 metres in the building and I already got well acquainted with all of the controls of the machine! With the controller, you can operate the floor and floor speed, and there is a joystick to manage the chute.  I showed my colleagues how it worked and in 5 minutes it was ready to go". 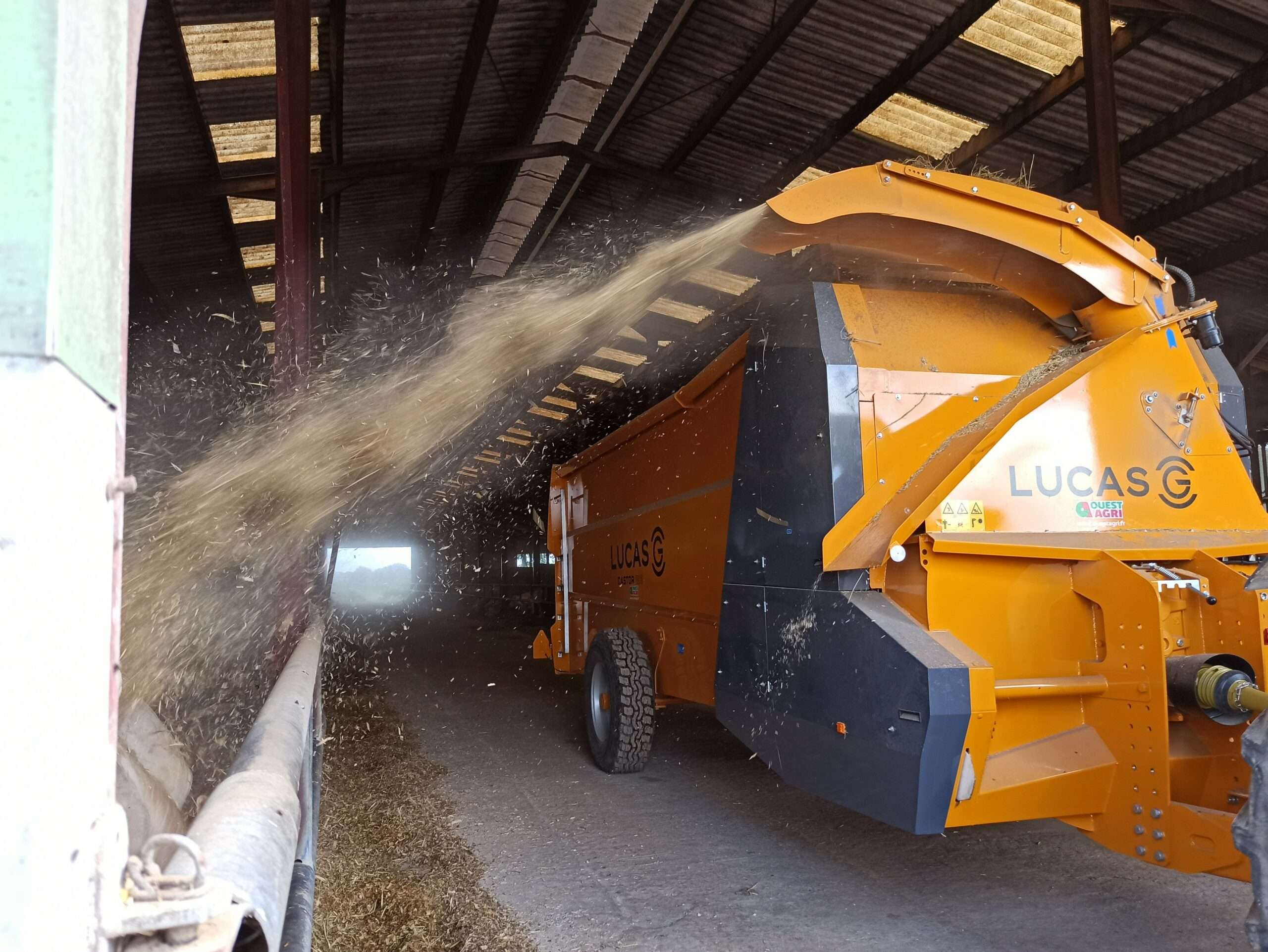 Another point that convinced Romain and his associates: the V-shaped shear bar designed for long straw to reduce blockages. For him, it was a game changer: "With long straw, you can really see the difference, it goes through better. The sections do a really good job with a regular flow.

Add to that the 270° universal chute, and the Castor 185 ticks all the boxes according to the young farmer: "We had it on the Raptor and I couldn't see myself using a lateral chute. Once you've tried it, it's hard to go back. It avoids manoeuvres, you can straw blow more easily to cover the whole pen.  Romain takes the opportunity to give a tip: "A very simple trick is when you pass over the poles between each box. With the swivel chute, I tilt it quickly to pass the post more quickly. This prevents the straw from getting stuck on the pole and falling into the bull’s feeding trough. That way, you don't have to go back and clean up".

Another important aspect is that the Castor 185 does not require an overly powerful tractor. At the GAEC de La Bréquinière, they have a 100 HP tractor but it is not even necessary to go that far, 80 HP is enough. This is what Romain confirms: "We could have a less powerful tractor. Even when straw bedding, I'm at 1400/1500 rpm, not at full throttle to limit my consumption, and it performs very well". 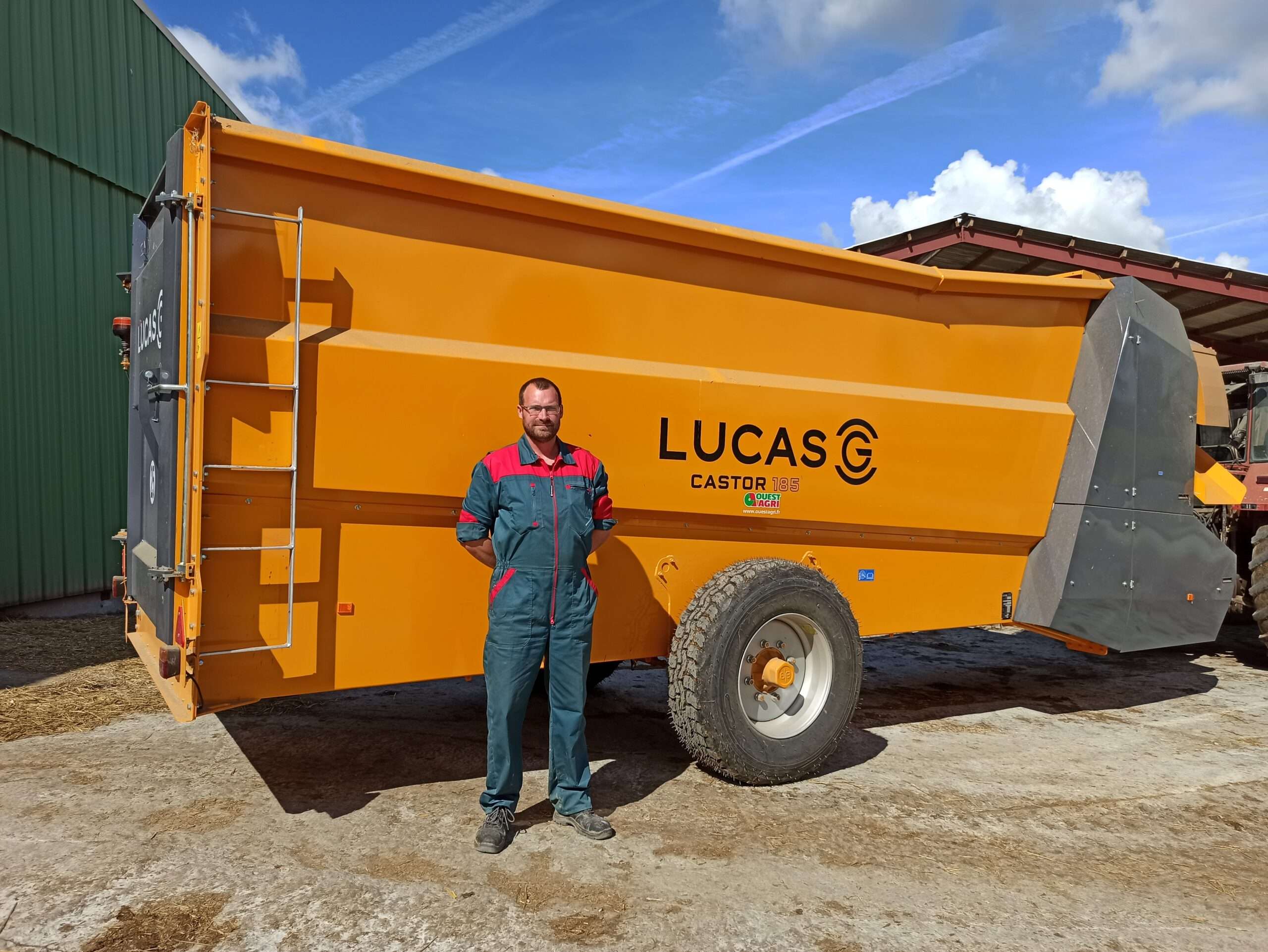 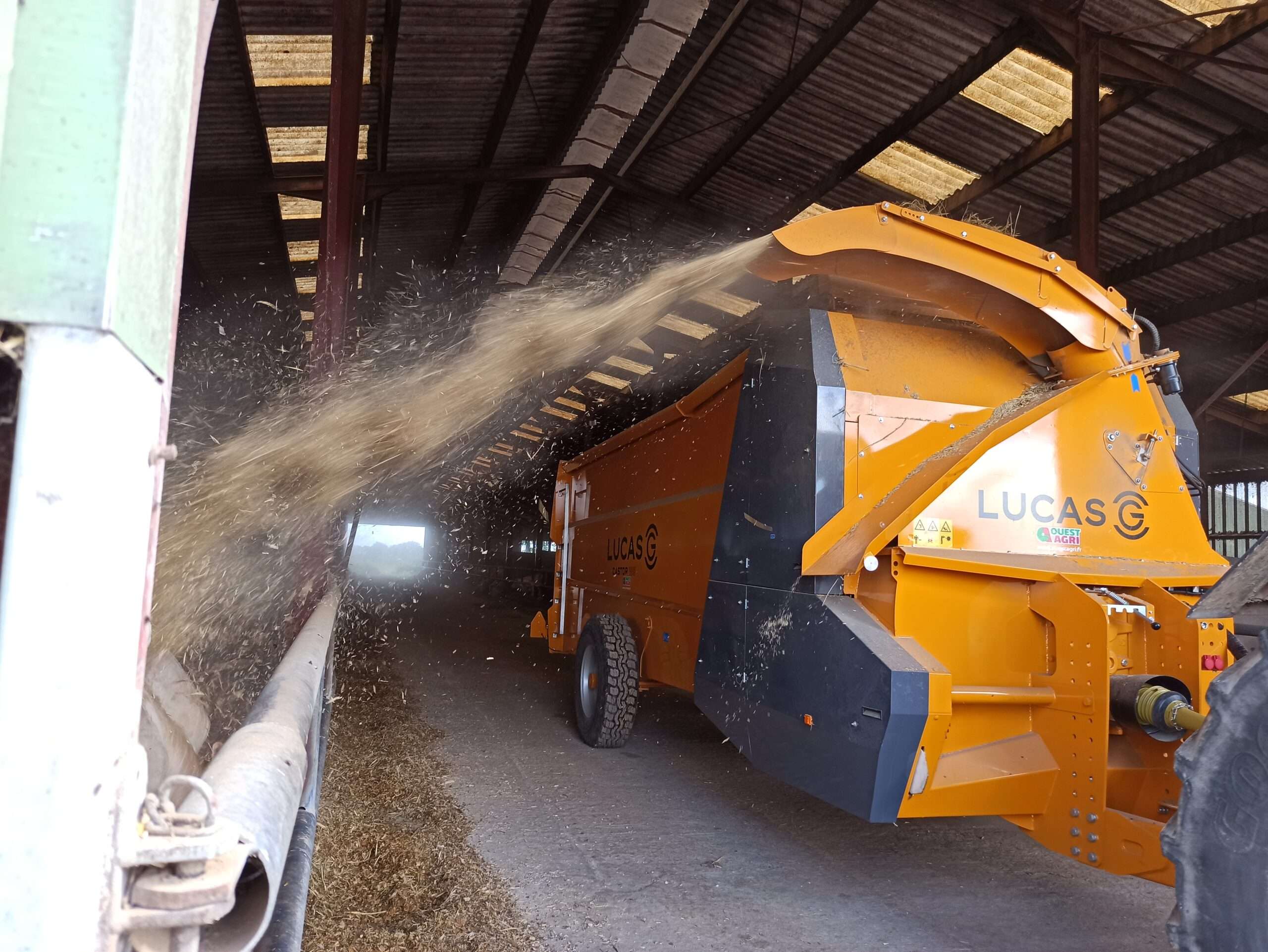 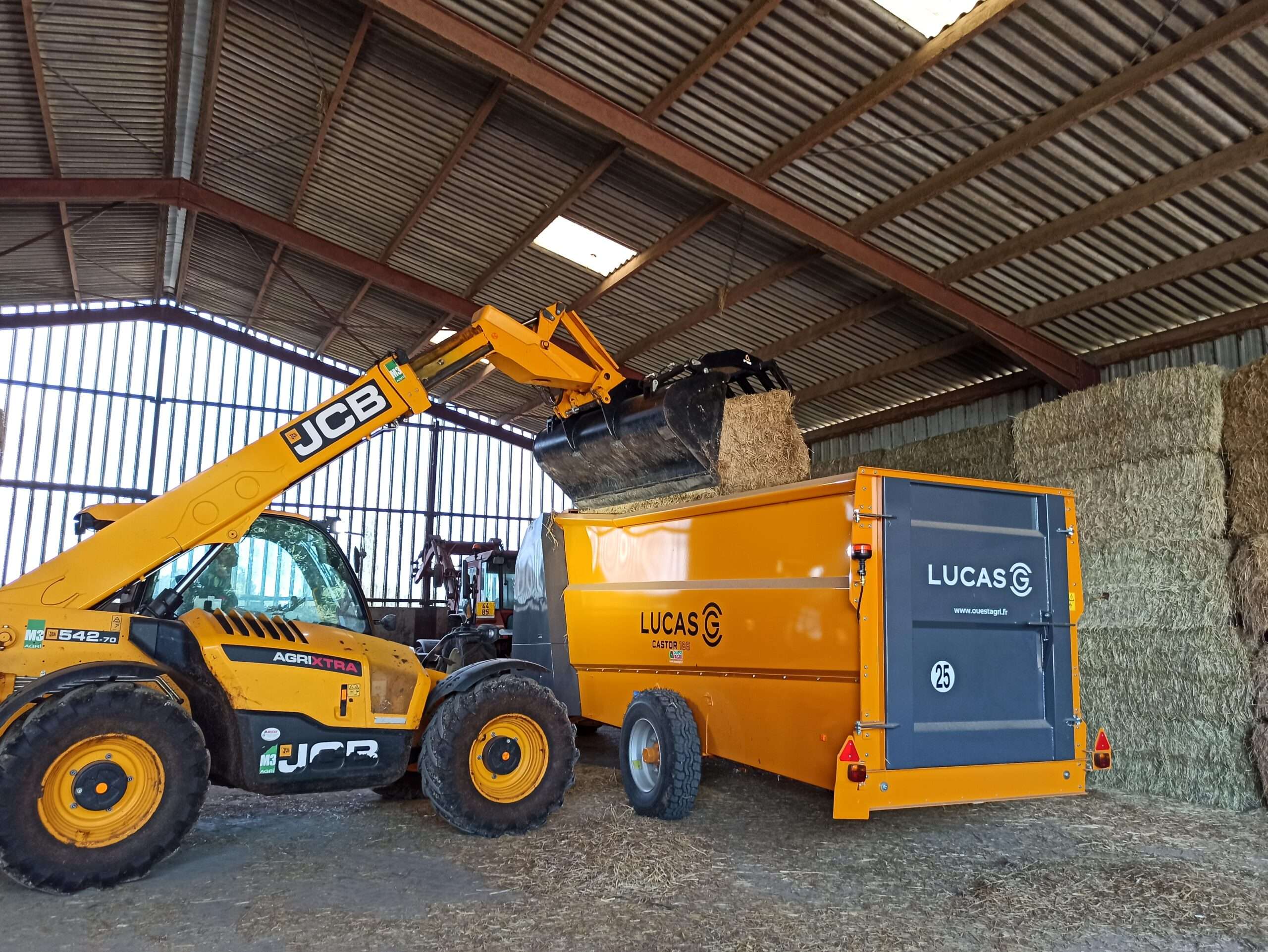 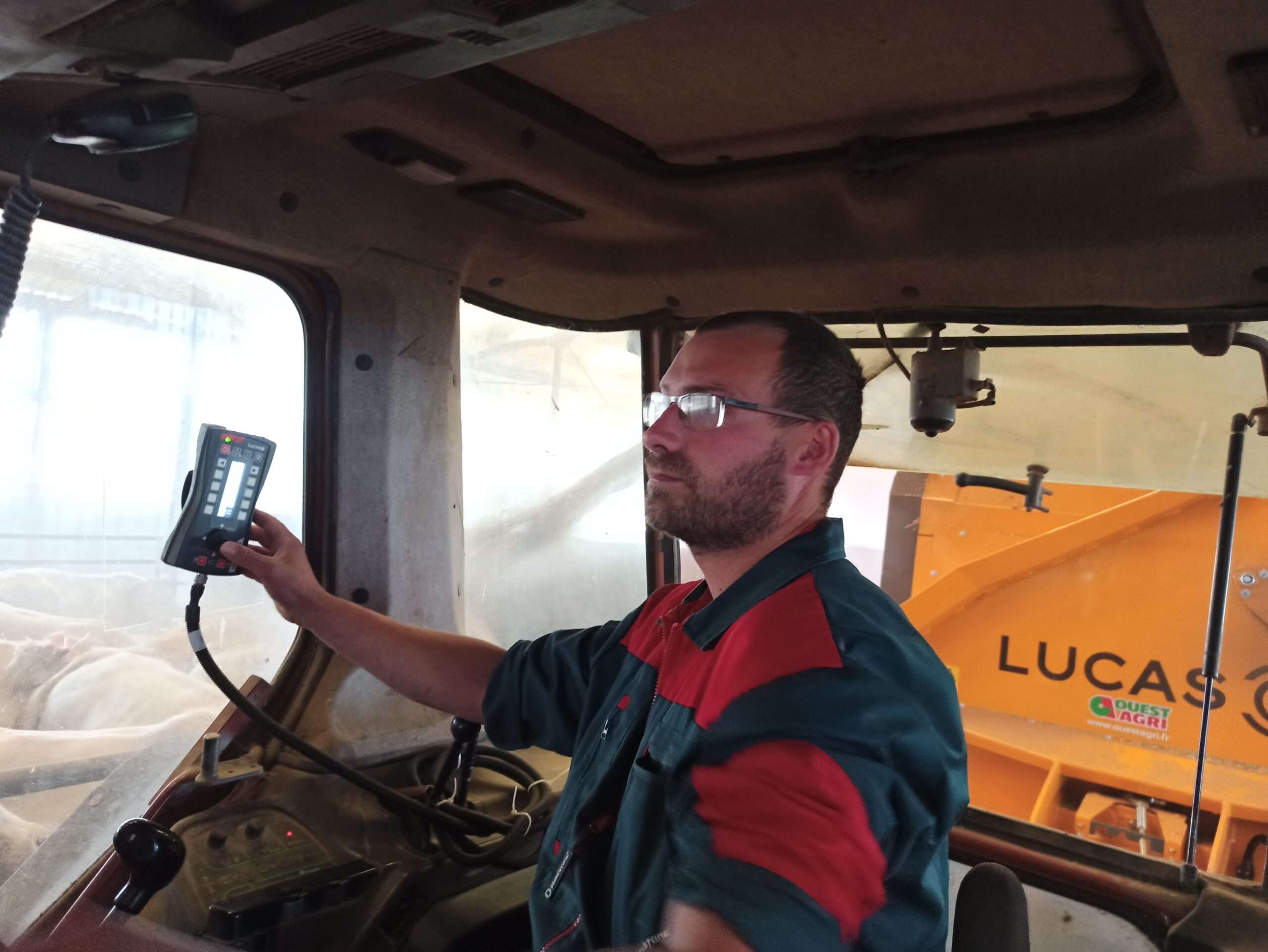